In supporting our charity of the year, we've been working with retailers alongside using our own social media platforms to help raise awareness of DENS' ‘Go Yellow for DENS Week’. 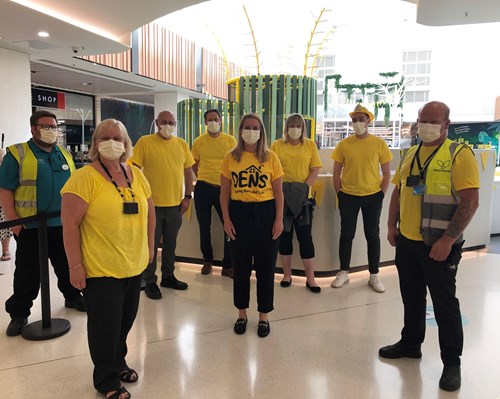 The initiative took place between Monday 21st June and Sunday 27th June, with local residents, businesses and schools within the Dacorum community invited to take part in the campaign by pledging to do something yellow during the week and making a suggested donation of £1 per person.

Alongside donating £250 for the charity, we also launched a number of initiatives during DENS Go Yellow Week, including turning our social media channels yellow, promoting yellow products from within stores, working with retailers to decorate their window displays yellow, a collection bucket and decorating the centre yellow.

Retailers at the centre also helped raise funds for DENS through their own campaigns. Notably the popular eatery brunch cafe created their own yellow themed menu, with funds raised from the sale of their lemon drizzle cakes and muffins going directly towards the charity. brunch cafe raised a whopping £137.50 as part of their fantastic initiative!

As part of DENS’ fundraising event on Friday 25th June, visitors to the centre were in for a treat with yellow bunting used to decorate the centre alongside extra surprises such as stilt walkers!

The event also saw volunteers have the chance to promote the charity’s services and upcoming events.

The support doesn’t stop there, with Pure Gym also set to hold a raffle for free personal training sessions, block sessions and packages to help raise funds for DENS.

We'd like to take this opportunity to thank each and every single one of our retailers of their support during #DENSGOYELLOW week.

Find out more about DENS here.